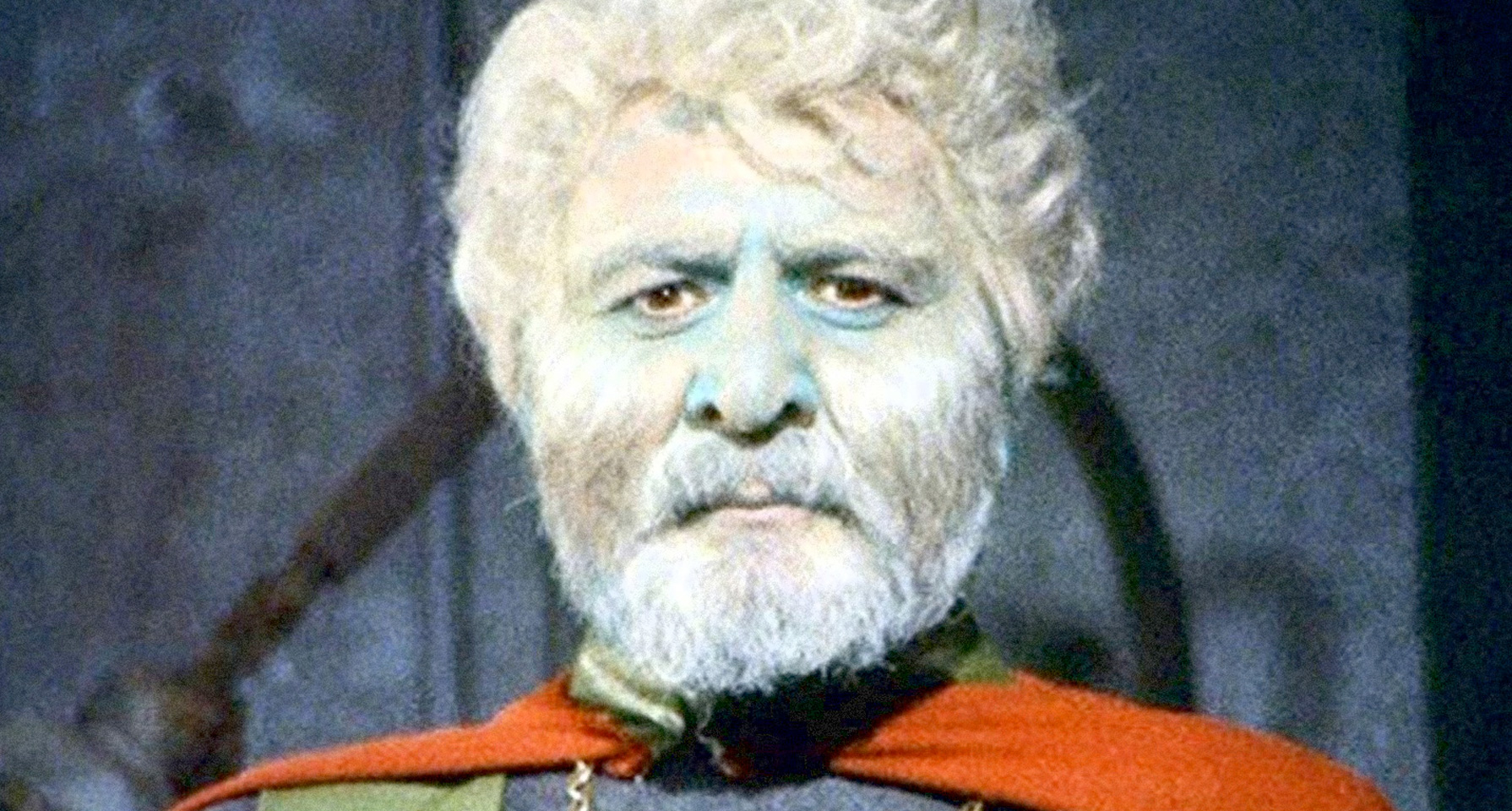 Italian science fiction is an acquired taste, even more so than most other Italian genre films. They often have a meandering quality to them, and the low budgets mean that a large portion of any film’s run time is composed of shots of guys sitting in front of decks of blinking lights. However, the Italians can only restrain themselves for so long, and eventually, those scenes of people in control rooms will be replaced by wonderful space battles and miniatures of orbiting stations and rockets with upward drifting smoke wafting out of the backs.

Antonio Margheriti, better known among the jet-set who know Antonio Margheriti at all as the director of a bunch of “just entertaining enough” war and action films during the 1970s, was one of Italy’s first science fiction directors. His 1960s space “adventure,” Assignment: Outer Space proved that despite my interest in old science fiction and my profession as a journalist, combining the two into one talky film is not a recipe for maintaining my attention. 1961’s Battle of the Worlds (Il pianeta degli uomini spenti) was an improvement, but just barely. Margheriti didn’t really hit his stride as a science fiction director until 1965, when he directed I criminali della galassia, better known in the United States as Wild, Wild Planet, the first in what would become known as the Gamma One Quadrilogy.

The few years between Assignment: Outer Space and Wild, Wild Planet made a world of difference. Not only is Magheriti a better director (he notched up a lot of work in the energetic sword and sandal genre during the early 1960s), but he has the full force of 1960s pop-art extravagance in which to indulge. And indulge he did. Wild, Wild Planet is a non-stop parade of swingin’ sixties eye candy, all set to swanky, finger-snapping cocktail lounge music courtesy of Angelo Francesco Lavagnino. The reckless adoption of a lounge lizard atmosphere means that even when Wild, Wild Planet lapsed into boring stretches, one hardly notices, so glorious is the celebration of groovy futuristic design and fashion.

Never one to lose time, Margheriti followed up Wild, Wild Planet with two sequels in 1966 — The War of the Planets (not to be confused with Alfonso Brescia’s Cosmos: War of the Planets) and War Between the Planets (not to be confused with, well, any of the other war and planets titles). In 1967, Margheriti “wrapped up” the series with a somewhat disappointing conclusion, Snow Devils. This isn’t to say that Snow Devils is particularly bad; it’s just so much less than Wild, Wild Planet. It certainly lives, for most of its run time, well within the confines of its limited budget, something Wild Wild Planet had no interest in doing. It also shows the limitations of Magheriti’s interest in the series. In fact, because Margheriti was juggling all four Gamma One films at the same time, he only directed a portion of Snow Devils, leaving an undisclosed amount of it in the hands of assistant director Ruggerio Deodato, a director possessed of no small amount of infamy related to the fact that he directed Cannibal Holocaust, one of the most controversial films of all time. But hey, he did other stuff, too.

For me, however, even the worst of Italian science fiction has an undeniable charm. Snow Devils is no different. Once I got over the fact that this wasn’t going to be a swinging space adventure — with the exception of Angelo Francesco Lavagnino’s score, which forges ahead under the assumption that we’re all putting on our best future suits and cocktail dresses and heading down to the space lounge to drink space martinis — and was, in fact, going to look more like something out of the 1950s where a group of scientists endure harsh conditions and wear parkas, well then I was able to lie back, get comfortable, and enjoy the meager pleasures afforded to me by this shaggy skunk ape of a film.

The Earth of the future finds itself suddenly plagued with natural disasters caused by global warming. The polar ice caps are melting at a surprising rate, and no one can figure out why. Certainly couldn’t be the fault of humans, this climate catastrophe. Floods, earthquakes, I’m pretty sure some volcanos probably erupted — you know. The usual. It’s up to our intrepid heroes from the Gamma One space station to get to the bottom of this mystery. Enter Giacomo Rossi-Stuart as Gamma One Commander Rod Jackson, who assembles his team and hires a sherpa that can only be described as “a really hyperactive Jimmy Cliff” to lead them to a remote weather station in the Himalayas where something mysterious has occurred that might clue everyone into why Mother Nature had suddenly gone loco.

The team contains a number of familiar faces from past Gamma One films (some of whom died previously and seem no worse for the experience), but most of them are in different roles, so don’t worry too much about character continuity. What you need to worry about is how much time is spent filming people walking through a snowstorm rather than being full of cool space-age bachelor pads and groovy bubble cars. It’s like Antonio Margheriti took his afternoon siesta, Ruggero Deodato was distracted, and somehow Bert I. Gordon snuck in and took over the film for thirty minutes.

Sharu the not-Asian Sherpa’s insane tribal dance freak-out is no salve for the lack of swankness, and the club in which it happens — high up in the mountains — is decorated more like the house of some sweet Bavarian grandma. You can almost sense the “where’s the Les Baxter Space Capades, man?” emanating off Rod Jackson and sidekick Captain Pulasky (Goffredo Unger) as they sit awkwardly on a wooden bench in front of calico drapes, resplendent in their Gamma One space uniforms.

But then, Italian science fiction films do enjoy interminably slow scenes of padding and promise to make up for it later on. We enter into a gentleman’s contract with them, where the meandering padding and budget-conscious time-wasting is tolerated in exchange for eye-popping, goofball madness later in the film — and Snow Devils does try, I think, to fulfill the bargain. It just misses the mark. The titular snow devils eventually appear when the Gamma One team stumbles across some space yetis in a cave. Rod Jackson and his crew are taken prisoner by the yetis, who seem to be somewhat primitive despite their cave being fitted out with lots of cheap spacey stuff.

t turns out the decor is courtesy of the head space yeti, who dresses like a terrible superhero and politely explains the entire nefarious plan to the Gamma One leader. The space yetis are from a dead planet, and they’ve decided, as is par for the course, that Earth will be their new home. Unfortunately, the planet is just too populated, so the space yetis have decided to wipe out humanity by tinkering with the climate. First, they will warm the planet, melt the ice caps, and flood human civilization out of existence. Then they will use their incredible cave-based technology to trigger a new and permanent ice age full of space yetis sledding down Mount Everest and making snow angels. This plan doesn’t sit well with Rod, and though he is undoubtedly thankful to the commanding space yeti for the detailed run-down of the scheme, Rod decides that no amount of face fur and jaunty capes is enough to forgive the space yetis their murderous aspirations.

Gamma One versus space yetis delivers the low-budget, idiotic thrills the film has been promising you, but once it’s over you realize the movie has only been going on for an hour or so. There’s a whole other tacked-on second climax with our Gamma One crew finally back in space, leading a retaliatory strike against the space yetis’ hidden space base, where they are still hanging around, messing with our climate. It really feels like Margheriti/Deodato wrapped the film, started packing up to go home, then realized they were about twenty minutes short of feature-length.

Luckily, those twenty minutes really deliver what I want and expect from a Gamma One film. All of the awesome miniatures, rocketships, and GI Joe action figures being swung around on wires in front of black backgrounds get crammed into the finale’s secret mission to track down, then blow up, the space yetis’ cosmic base, putting to an end their dastardly plans to do to humanity with climate change what humanity is perfectly capable of doing by itself to itself, thank you very much. Fans of cheap sci-fi special effects will not be disappointed. My favorite aspect of this has to be the spacewalks, which are realized in one of two ways: either by dangling an actor from a wire by their ass, allowing them to sort of just flail and spin around aimlessly; or by whizzing around little action figures with wind-up arm and leg kicking action.

I wonder if the film might have been more of a success if Margheriti’s head had been more in the game. Leaving the bulk of the work to assistant director Ruggero Deodato — and a novice Deodato at that — results in a noticeably different vibe. Because Deodato is best known for his nastiest film, one might assume he brings a harder edge to the Gamma One series. That’s not the case, and one needs to remember that although Deodato made a name for himself with Cannibal Holocaust, it’s not his definitive film — or it is, but it’s not the nastiness that makes for definitive Deodato; it’s the pointless wandering. I can think of a lot of Deodato films I can’t stand, but only one I really like (Raiders of Atlantis). Like most Italian directors, he made films in every genre, but his contributions always end up being, for me, slightly shoddy examples of each of the genres. Whether he’s ruining the Diabolik-inspired super-villain/fumetti film (Phenomenal and the Treasure of Tutankhamen) or the poliziotteschi film (Live Like a Cop, Die Like a Man), he always seems to bring a grubby sort of disinterest to much of what he makes.

Still, I don’t know that all of Snow Devils‘ shortcomings can fairly be placed at Deodato’s feet. It’s not like Margheriti was a perfect hitter or anything. But a disinterested Margheriti coupled with a green Deodato certainly goes a long way to sink a film that has a pretty solid high concept. The cast does what they can in familiar roles (even if some of the actors have swapped those familiar roles), but few performers can out-act scene after scene of walking wordlessly through a fake blizzard. Maybe Tarkovsky’s Snow Devils could have made that work, but not this one.