Strip Nude for Your Killer 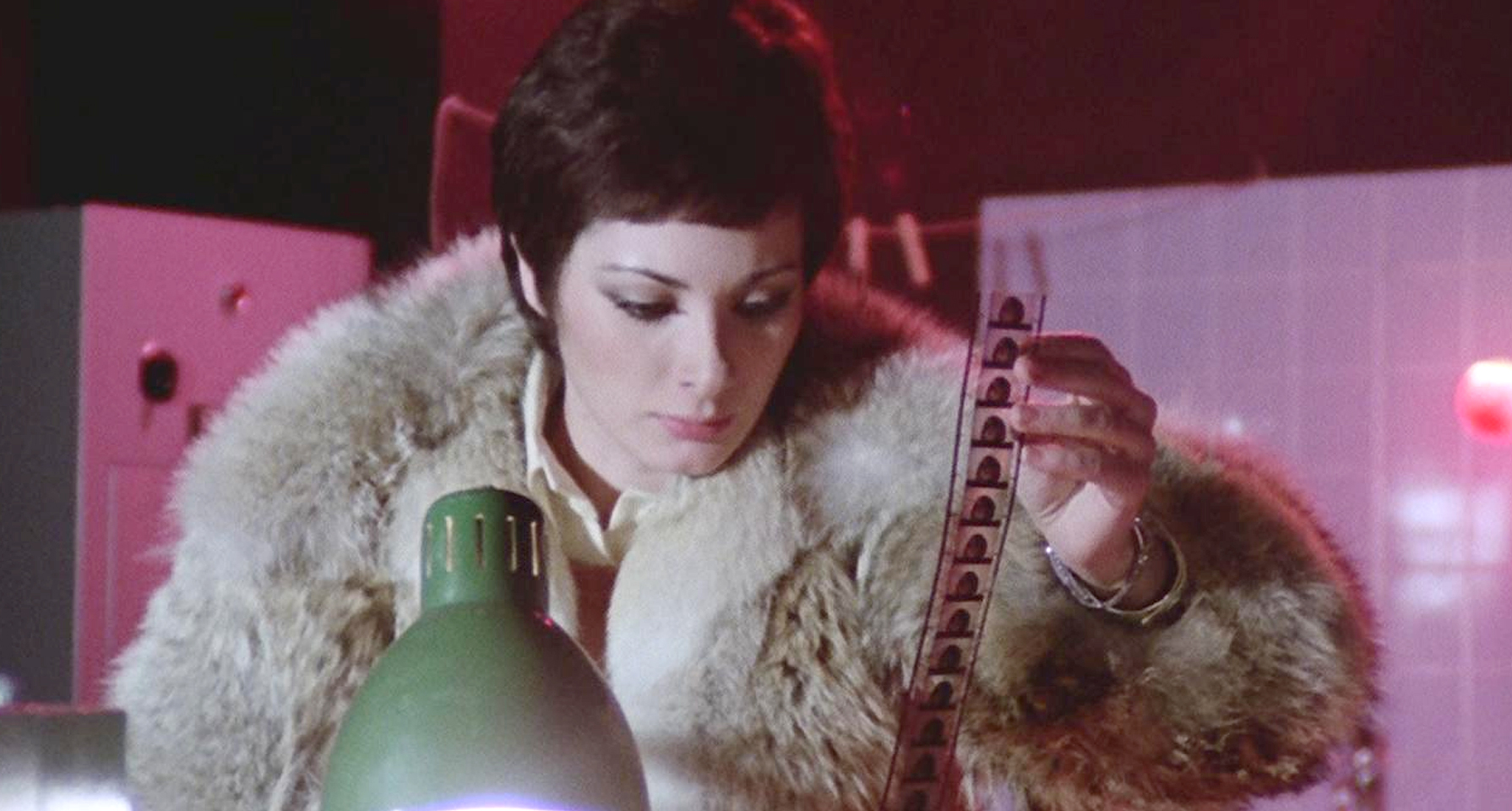 Strip Nude for Your Killer (Nude per l’assassino) may be scummy, but it wastes no time letting you know exactly where you stand. The first shot is a full-frontal nude shot of a woman in a doctor’s office, legs spread in medical stirrups, with a doctor’s face firmly planted between her thighs. If this image—and keep in mind that it is quickly revealed she’s in the middle of an abortion—offends or insults you, then it’s best to just skip on to some other movie. Perhaps Dario Argento’s Deep Red. It’s really good, and as far as gialli goes, it’s pretty clean. At least it doesn’t start off with a close-up of a woman getting an abortion. I’d never argue that Strip Nude for Your Killer isn’t offensive, tasteless garbage, but honestly, if you watch that first scene and then decide to keep going, you’re accepting responsibility. The woman suffers a heart attack, so the doctor and his assistant bring her back to her home and dump her in the bathtub in hopes that the police will chalk it up to a heart attack without noticing the abortion thing.

From there, the film picks up at a photography studio staffed primarily by snide, condescending people who hate each other. Among them are photographers Carlo (Nino Castelnuovo) and Magda (Edwige Fenech), who are involved with each other, though Carlo is by no means a one-lady man. The other cast members all have names too, but there’s not much point in remembering them since they’re all basically the same character, and they’re all going to die anyway. And sure enough, it doesn’t take too long before someone is stalking the employees of the studio and killing them off. Signature murders include the stabbing of a woman who, upon realizing a prowler may be in the house and all her co-workers are getting murdered, investigates while completely nude except for a pair of clunky platform clogs. Then there’s the one where, after charmingly attempting to rape a co-worker before going impotent, a guy in saggy tighty whities and black dress socks, clutching a deflated blow-up doll in one hand and a kitchen knife in the other, cries uncontrollably. Again though, it’s not like the film didn’t warn you.

One by one, the cast is whittled down to a few potential suspects. Carlo and Magda, who are suspects as well, take it upon themselves to investigate the murder. For some reason, any time they turn up a clue, they make a big fuss about how they couldn’t possibly go to the police with it, even though there’s no actual reason they couldn’t go to the police beyond the fact that the film depends on the concept of the amateur sleuth working outside the bounds of the police. Well, that and because writer-director Andrea Bianchi sort of blows at writing stories. When the killer is finally revealed…well it’s best for anyone watching this movie to master the use of the phrase, “Oh, come on!” Strip Nude for Your Killer isn’t quite so bad as to have the killer be someone that hasn’t appeared in the movie up until the point they are revealed to be the killer (“It was his brother, who we’ve never seen!”), but it’s close.

There are plenty more “Oh, come on!” moments to keep your eyes rolling. Like the part where Magda goes to retrieve film from Carlo’s studio that presumably has pictures of the killer on it. While there, the lights go out, and Magda hears someone else sneaking around. So, knowing that everyone who works at the studio is being murdered, knowing that you have the one piece of evidence that could reveal the killer, and knowing that the killer knows you have it, when you are in this place and the lights go out, do you instantly think, “It’s likely this killer who has been stalking us has now arrived here!” or do you think, “Surely it’s just a fuse that happened to blow at this precise moment.” Strip Nude for Your Killer definitely requires a healthy sense of humor to get through.

Director Andrea Bianchi doesn’t possess the stylistic flourishes that make many other bad gialli worth watching even when their plots are of dubious merit. What he lacks in terms of inventive direction he attempts to make up for with sleaze. On that level, he’s a Viking. Before you even start the movie, you can guess what sort of ride you’re in for. Some movie titles make lascivious promises the movie can’t keep, but Strip Nude for Your Killer is not one of them. Here’s a film that plays a botched abortion for cheap titillation and ends with a joke about a guy strangling his girlfriend and sodomizing her against her will.

In between, you get frequent male and female nudity, plenty of slasher gore (usually in the form of the aftermath of a murder), and an all-around level of scumminess that becomes so thick it takes on the properties of camp excess. I don’t blame anyone who finds the film irredeemable and offensive, but for me, its willingness to gleefully reel about in the muck with reckless disregard for even the most frayed threads of decent taste keeps Strip Nude for Your Killer from being offensive. It’s too idiotic to be taken with that degree of seriousness. This movie is like stumbling upon a hobo masturbating behind a dumpster. Sure you could get offended, but honestly, what’s the point?

One of the fun things about gialli is that they actively invite psychoanalysis. Regardless of how shoddy and shallow the product may be, if it just follows the template close enough, it can piggyback on the psychological groundwork of Bava and Hitchcock. Bianchi had nothing to say with Strip Nude for Your Killer. He wanted to make a sleazy murder mystery and get Edwige Fenech naked as often as possible, plus show a guy in saggy underpants. That’s exactly what he did. But because, by 1975, so many gialli had been made and the cliches of the genre were so well established, he didn’t have to put any thought at all into having things viewers could pick up on in the never-ending quest to artistically justify even the basest and greediest of crap.

Strip Nude for Your Killer is rife with the standard giallo themes, the most obvious of which is the deceptive nature of observation. You could even justify the tasteless opening by saying that Bianchi is intentionally duping the audience into thinking they’re getting a bit of cheesecake right off the bat, only to spoil it by introducing a dramatic and tragic revelation regarding the nature of the nudity we are observing. You would, I think, be full of shit if you did this, but you could still do it.

Later, the roll of film with the killer’s identity is brought into play under the assumption that a photograph of a murder in progress is irrefutable proof. Once again, however, very little is what it appears to be. Edwige spends much of the movie poring over photographs of the victim, an old magnifying glass plastered to her face as a visual homage to the dime store detective novels from which gialli grew (and also as a fine example of how magnifying glasses aren’t designed to work). In Strip Nude for Your Killer, as in many other superior gialli, the protagonist spends a great deal of time examining and re-examining something that seems clear but is later revealed to hold a significance no one recognized. Bianchi is just copying what he’s seen before in anything from Blow Up to Deep Red, but it’s still kind of fun and one of the reasons even bad gialli are still enjoyable to dissect.

There is one big reason, at least above the simple blanket “because it’s an Italian giallo,” to watch Strip Nude for Your Killer, and that’s Edwige Fenech, a staple of both Italian sex comedies and gialli. She brings to the game a dangerous combination of acting talent, comedic timing, and a willingness to play along with whatever loony idea the filmmakers throw at her. She split her time evenly between exceptional films like All the Colors of the Dark and other films with director Sergio Martino, and dodgy nonsense like Strip Nude for Your Killer and The Case of the Bloody Iris. She was always game though, and never looked to be half-assing it even when her primary role was to show half her ass. In Strip Nude for Your Killer, she’s about as close as you’re going to get to a likable character, even though she’s condescending and nasty to people. But when you’re surrounded by the likes of mean-spirited S&M lesbians, a guy who thinks anal rape is hilarious, a crying guy who thinks rape is the way to a woman’s heart, and someone who is killing a bunch of people—well, it’s not hard to look like the good guy.

If you are looking for a good and proper introduction to the world of Italian murder mysteries, Strip Nude for Your Killer is not your movie. You want to be watch The Bird with the Crystal Plumage or Blood and Black Lace or All the Colors of the Dark. Still, if you’re already prepared for the peculiarities of sloppy Italian filmmaking, Strip Nude for Your Killer is surprisingly enjoyable. Even though it’s poorly written, relentlessly tasteless (actually, because it’s relentlessly tasteless), has very few points you could single out as being good other than Edwige Fenech, and is packed full of gratuitously seedy garbage (once again, what I mean is because it’s packed full of gratuitous, seedy garbage), it entertains, albeit on that level that might make you feel like you need a shower afterward.