War of the Welles 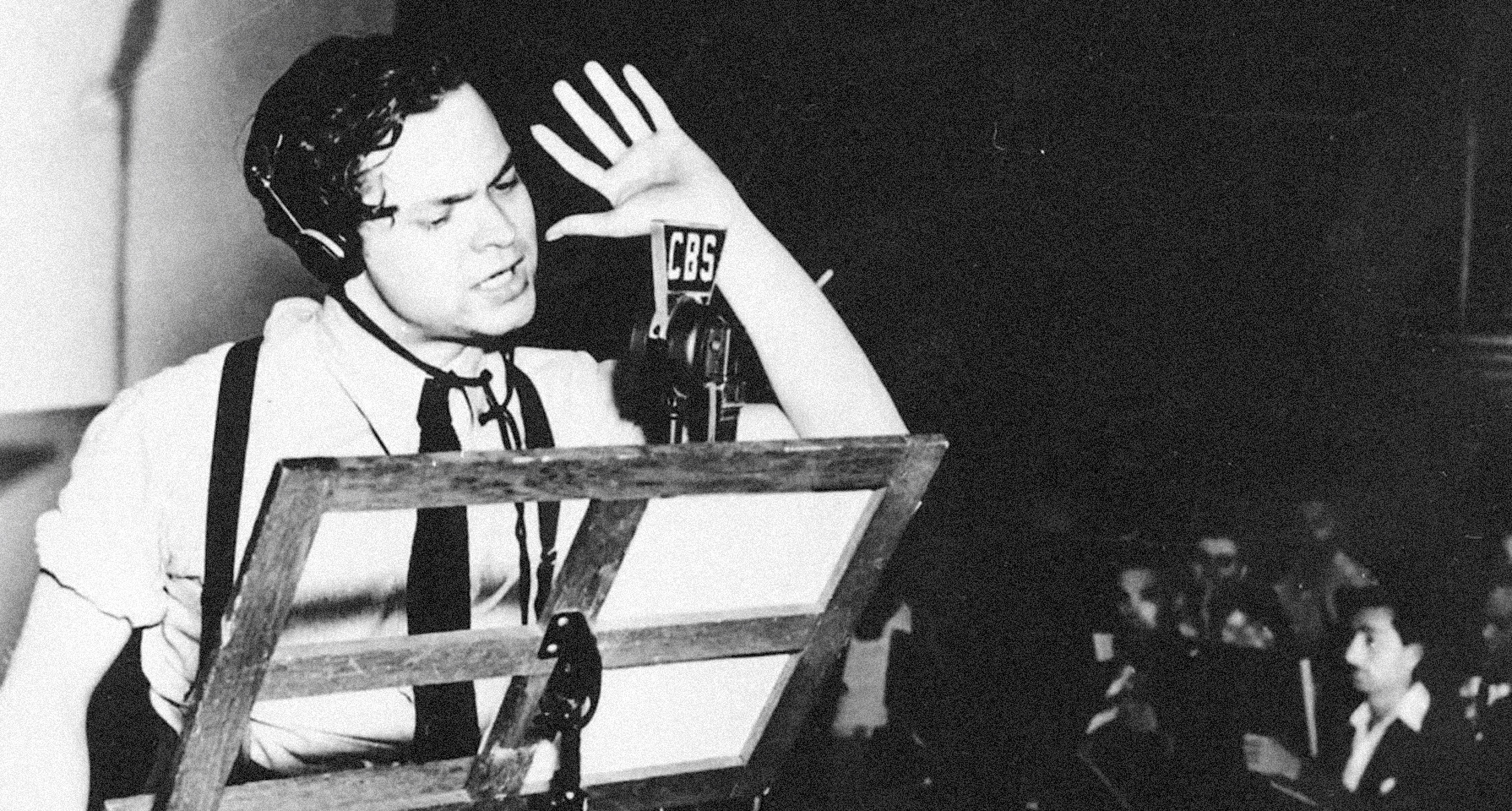 The Radio Broadcast that Panicked America…Or Did It?

When I was young still and open of mind, my parents set me loose in a college bookstore with the understanding that I was allowed to choose for myself from the racks of tapes and books some manner of entertainment. I perused the offerings with the sort of diligent focus that can be mustered only by a seven-year-old with a serious decision to make. Not a book, I decided, even though there were several promising ones. I wanted something in which I could indulge on the long car ride home, and I was prone to car sickness when I tried to read in the back seat. So a cassette, but which one? I flipped through the racks, past recordings of old radio dramas. The Shadow? Maybe. Lights Out Theater? Even better. But then I found it. With nary a doubt in my mind as to the correctness of my decision, I took from the rack and presented triumphantly to my mother my choice of prize: a recording of Orson Welles’ legendary broadcast of The War of the Worlds on Halloween eve, 1938.

Although I’d not heard the broadcast, I’d heard of it. Any kid with a decent collection of monster and sci-fi books knew the legend of Orson Welles’ War of the Worlds, and I daresay my collection of monster and sci-fi books was rather more than decent. Even before I could read, I willingly frightened myself with the pictures in books about Frankenstein, Dracula, Wolfman, and the Mummy. While others my age whiled away their time watching Electric Company and Sesame Street, I stayed up late watching old horror movies. I watched the Universal monsters on WHAS’ “Memories of Monsters.” On Saturday afternoons, I watched “Matinee at the Bijou” on WKET instead of cartoons, thrilling to the exploits of Commando Cody, Flash Gordon, and Tarzan. I knew Pepe Le Moko better than I knew Mr. Rodgers. If I was in the car, I would request public radio, not because I was keen on light jazz and classical music, but because they would rerun old radio dramas, as well as new ones like Star Wars. Yes, there was a Star Wars radio dramatization.

Among my prize possessions was a set of paperback books with relatively plain black covers, each with a picture of a different famous monster on it denoting the topic of the book. Vampires, werewolves, and mummies each had a volume, as did science fiction and space monsters. It was within their pages that I first learned about the monsters I hadn’t seen yet on late-night television: the ghoulish Count Orlok from Nosferatu, the disturbing somnambulist of The Cabinet of Dr. Caligari (those books also taught me the word “somnambulist,” of which I was particularly proud in second grade), the nightmarish version of Frankenstein’s monster from Hammer’s Curse of Frankenstein, the weird helmeted aliens of The Mysterians…and the story of the night Orson Welles sent radio listening Americans into a state of mass hysteria.

The Eve of the War

We listened to my new cassette on the way home. I sat in the back seat of the car, enraptured. When we got home, I dashed to my room and listened to the entire broadcast again, this time with the lights out and the darkness of night leaving nothing in existence except me and the tinny sound of Orson Welles and his crew of actors contesting with a Martian invasion, weathering the destruction of Grovers Mill, New Jersey (a location decided upon by the most scientific of methods: Orson Welles, when writing the script, threw a dart at a map to determine where the first Martians would land), and constantly interrupting the music of Ramon Raquello and His Orchestra, live from the Meridian Room at the Park Plaza Hotel in Manhattan.

In the autumn of 1938, the United States was primed for panic. In August of that year, the German military mobilized. On October 15, they invaded then-Czechoslovakia. Despite efforts to appease Hitler, it seemed the German appetite for conquest and, more acutely, the desire to revenge itself against the harsh punishments levied against it after World War One, was going to send Europe into a second horrible conflict. Although war had not yet been declared in 1938, and although the United States was determined to stay out of it even if it was, there was tension rippling through a nation only just emerging from the Great Depression. Amid this air of paranoia, a little-known dramatist named Orson Welles stepped behind the microphone for another broadcast of a radio drama, CBS’ The Mercury Theatre on the Air.

When conceiving of the radio play, Welles decided to stage the first 2/3 of it as a series of news broadcasts reporting first the spotting of strange eruptions on Mars, then later the arrival of a mysterious cylinder and the subsequent obliteration of humankind by the invading Martians in their terrifying tripods. At the time, breaking news radio broadcasts of this nature were still a relatively new feature of the American landscape, And Welles was taking advantage of both their novelty and their unfamiliarity. Although he would claim later to have been taken aback by the hysteria the broadcast caused, it seems more likely that the impish Welles, in styling his broadcast in this manner, knew exactly what he was doing and exactly what sort of reaction that could result. One need only look at the precise timing of the play’s breaks, coordinated to the second with the timing of another, more popular broadcast.

When the play aired, there was the customary introduction by the announcer: “The Columbia Broadcasting System and its affiliated stations present Orson Welles and the Mercury Theatre on the Air in The War of the Worlds by H. G. Wells.” People who listened to Mercury Theatre on the Air, many did so only after first tuning into NBC Red Network’s Chase and Sanborn Hour, which had its first musical break at fifteen minutes. Many listeners would then switch to CBS. What they heard was expertly timed by Welles—reports of strange occurrences from Grovers Mill. The show’s announcer did not return again until the broadcast was halfway over, after the play’s version of a radio broadcast had gone from CBS to military channels to the forlorn muttering of radio’s sole surviving broadcaster: “2X2L calling CQ…2X2L calling CQ…2X2L calling CQ…New York. Isn’t there anyone on the air? Isn’t there…anyone on the air? Isn’t there anyone…”

The Coming of the Martians

On good Halloween years when I was in elementary school, my class would gather around a fire (well, a fire made of construction paper) and either our teacher would regale us with ghost stories, or we’d be permitted to bring in records and tapes of spooky sounds, celebrities reading macabre tales, and other audio accouterments of the season. I always brought in two of my most cherished tapes: a recording of someone reading Henry James’ spine-tingler The Turn of the Screw, and of course, Orson Welles’ The War of the Worlds. I had determined early on that listening to the broadcast was going to be an annual tradition for me. And it has indeed remained so.

In 1938, when the broadcast returned to the air after the brief station identification, the format switched from a mock newscast to a monologue (with one brief dialogue scene) performed by Orson Welles as one of the few remaining survivors of the invasion, evading Martian tripods as he wanders the desolate, abandoned streets of New York. Anyone who was fooled by the broadcast must have been clued in by now, but then, most of the people fooled by the first portion of the play were already in a panic, fleeing what they thought to be a true invasion by Martian war machines (or possibly German bombers) and pestering local police, radio stations, and fire departments with hysterical reports of Martians, heat rays, poisonous black smoke, and other fantastical instruments of destruction.

Only, it didn’t happen. Not just the Martian invasion, of course. But the entire state of national panic. Well, not exactly, at least not the way it’s sometimes been told.

The World After the War

The madness that Orson’s little prank caused has been much reported and passed on as truth through the ages. And while it’s true that some people, tuning in late to the show, were conned into thinking America was under attack by Martians, the reports of nationwide mass hysteria, or even hysteria localized to the New York-New Jersey area, were blown out of proportion by newspapers. A minor furor erupted outside of the broadcast studio, forcing Welles and his cast to sneak out through the back entrance. But Welles, only 23 years old by the way, was already a clever showman. When word of the panic reached him, he played the situation to his advantage, issuing a stunned apology that many have called “his finest hour as an actor.” The newspapers, in turn, were more than happy to drum up their sales figures by inflating the reports of the terrifying effect the broadcast had on America.

Not that America was completely without a panic. There were indeed a number of listeners duped by the broadcast. They, in turn, alerted others, including the police who, receiving an increasing number of calls of this nature, had little recourse but to think that maybe something screwy was indeed going on. By the end of the show, it was the press more than the people that were in a frenzy. Many people interviewed after the fact were caught up less in a panic caused by the actual broadcast and more by the panic that followed after it was reported as having caused mass hysteria. By the time the papers were done with things, it sounded like all of America had been screaming in terror and setting things on fire. But when the cast and crew of The Mercury Theatre on the Air were finally allowed by reporters and police to leave the building, they found life in New York proceeding as it always had, without bonfires or terrified mobs running away from the Martian tripods they thought they saw—or that the Daily News insisted they thought they saw. One can forget, amid the furor that surrounded the broadcast, how good Welles’ version of Wells’ novel is. Orson’s version would, in many ways, serve as the template for the cinematic adaptation George Pal produced decades later.

A few people caught up in the scare filed lawsuits against Welles and CBS. All but one was dismissed. The sole payout to come from any of these lawsuits was settled out of court, upon the insistence of Welles himself, and was for the price of a pair of men’s shoes, which the plaintiff had purchased purely for the purpose of running away from Martians. Despite the fallout—for even if much of the panic was manufactured by the press, the government was still going to react to it—Welles’ reputation as a master dramatist was cemented. Three years later, in 1941, he made his first feature film: Citizen Kane. The previously low-profile, unsponsored Mercury Theatre on the Air found itself with an advertiser. America as a whole learned a valuable lesson about mass hysteria, media manipulation, and overreaction. Thanks to Orson Welles, today we never fall for false news stories, sensational bait headlines, or manufactured outrage and panics.

“So goodbye everybody, and remember the terrible lesson you learned tonight. That grinning, glowing, globular invader of your living room is an inhabitant of the pumpkin patch, and if your doorbell rings and nobody’s there, that was no Martian; it’s Halloween.”